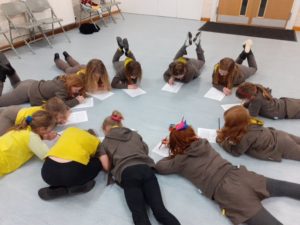 For some time now we have been keen to attract younger members to the Friends of Chartres On March 5, Julia Sander and Rosie Speer went along to a meeting of the 6th Chichester Brownies to facilitate them earning their Language Badges.

Fifteen Brownies aged between 7 and 10 years old proudly demonstrated to us their knowledge of French colours and numbers, and even “how to survive in a French café”!  They were taught how to introduce themselves and to say “ça va?” before talking what it means to have a twin city in France. The Brownies were delightfully excited about the idea and promised to go home and tell their parents/carers about Chartres.

A number game and a wordsearch rounded off the session and Brown Owl told them they had all achieved the badge.